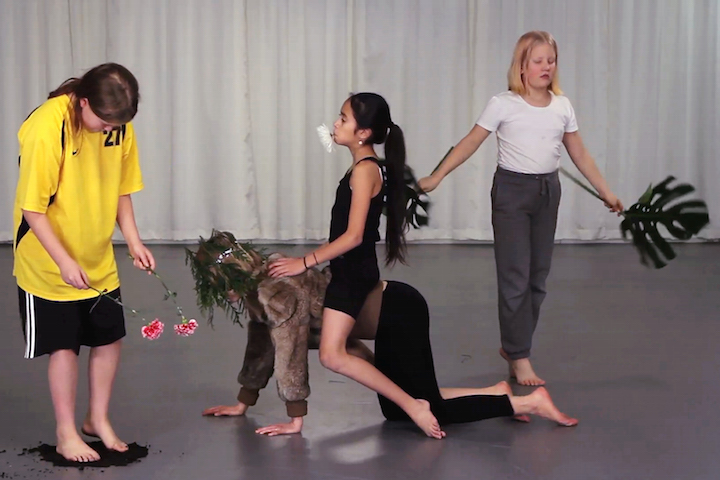 A Group Exhibition About Plants

Responding to a new field of critical thought, Imperceptibly and Slowly Opening uses the group exhibition format to explore the strangeness of plants and algae, and how they trouble human structures. Vegetal life forms are banal in their ubiquity. Undeniably alive, yet silent, they creep upwards, their roots submerged and out of human sight. Like anarchists protesting order, weeds break through concrete. Plants challenge theoretical logic as well; they can be both one and many: Aspen trees growing on a hillside share a single root system. Plants have occupations and desires: engaged in constant growth, they spread out with a will to consume and occupy space. Studies confirm that plants communicate and activate built-in chemical defense mechanisms to ward off predators. Some even move visibly: Mimosa plants close in on themselves when touched by a human finger. This would suggest some kind of sentience, but what would the character of that sentience be? How do we quantify it? Imperceptibly and Slowly Opening highlights the inaccessible subjectivity that plants possess. Proposed artists install multi-disciplinary artworks showing plant life as it troubles both physical and ideological human spaces. Capitalizing on the potential for multi-disciplinary programming, this exhibit includes Impatient Flowers — a performance series curated by Every house has a door, The Lichen Museum (Sector 2337’s first Institution-in-Residence), a three mile plant walk, and a series of talks. Its affiliated and forthcoming catalogue (The Green Lantern Press, 2016) contextualizes participating artists with auxiliary writing by Giovanni Aloi, Joela Jacobs, Renan Laru-an, Michael Marder, Catriona Sandilands, Steven Shaviro and others. Curated by Caroline Picard, this exhibition is part of an on-going investigation that began with Field Static (The Co-Prosperity Sphere, 2012), Ghost Nature (Gallery 400 / La Box ENSA, 2014), and congealed last fall in a group show about the material of the human body, The New [New] Corpse (Sector 2337, 2014). Following suite, Imperceptibly and Slowly Opening attempts to examine and celebrate the verdant strangers among us. Lindsey French, “some alteration of the one who feels,” urushiol extract, glass containers, 1/2 oz. Lindsey French, phytovision: cinema for plants, Invasion of The Body Snatchers and Day of the Triffids, LEDs, and custom software, 1:13:57, and 1:34:00.

Srijon Chowdhury (b. 1987, Bangladesh) lives and works in Los Angeles, California and Portland, Oregon. Chowdhury received his MFA from Otis College of Art and Design in 2013. Solo exhibitions of his work have appeared in Los Angeles at Klowden Mann and at The Gallery in Dhaka, Bangladesh as well as in group shows at the Torrance Art Museum, California; Launch Gallery and Helen Bolsky Gallery in Los Angeles; Upfor in Portland, OR; and in Miami at Fredric Snitzer Gallery.

Zoe Crosher is an artist who lives and works in Los Angeles. Inspired primarily by the collapse of the image and the imaginary, Crosher explores disconnects between the fantasy of something and its reality. She is the founder and president of the Los Angeles branch of The Fainting Club. Crosher has taught at UCLA and Art Center College of Design, and was Associate Editor of the journal Afterall after receiving her MFA from CalArts. In 2011 she was awarded the prestigious Art Here and Now Award by the Los Angeles County Museum of Art and is a recent recipient of the Rauschenberg award. Her work has been included in MoMA’s 2012 “New Photography” exhibition as well as extensive exhibitions throughout the United States and internationally. Most recently, Crosher worked with the Los Angeles Nomadic Division (LAND) on “The Manifest Destiny Billboard Project,” a series she initiated of artist-produced billboards and activations that unfolded along the Interstate 10 Freeway from Florida to California through the spring of 2015.

Lindsey French is an artist and educator whose work engages in gestures of communication with landscapes and the nonhuman. Embracing a number of mediation strategies, her projects materialize as texts written in collaboration with trees, video performances of attempted dialogues with the landscape, and sound installations of distant and displaced forests. French has shared her work in places such as the Museum of Contemporary Art in Chicago, the Chicago Cultural Center, the Chicago Perch, the Pico House Gallery in Los Angeles, Flying Object in Hadley, MA and in conjunction with the International Symposium of Electronics Arts in both Albuquerque and Vancouver. Her work has been featured in an essay in Leonardo and discussed on podcasts for Creative Disturbance. French currently teaches courses that explore new media practices and site specific research at the School of the Art Institute of Chicago in the Art and Technology Studies, Sculpture, and Contemporary Practices Departments.

Essi Kausalainen (b. 1979) has studied performance art and – theory in Turku Arts Academy and the Theatre Academy of Finland. Her work has been exhibited and performed in venues such as la Galerie (Noisy-le-Sec), kim? (Riga), Malmö Moderna Museet, Frankfurter Kunstverein, Museum for Contemporary Art Roskilde, Nikolaj Kunsthalle (Copenhagen) and Kunstraum Bethanien (Berlin).

Deanna Ledezma is a Ph.D. student in the Art History Department at the University of Illinois at Chicago (UIC). Her research explores turn-of-the-century vernacular photography and the material culture of memory in the United States. Her projects have examined the material practices of photography in the home, hairwork and photographic jewelry, and the transformation of nineteenth-century relics in the work of contemporary artist Dario Robleto. She received her master’s degree in Art History from UIC and undergraduate degrees in Art and English from Texas State University. During her graduate studies, she has held the Abraham Lincoln Fellowship (2011–2012; 2013–2014) and the Diversifying Higher Education Faculty in Illinois (DFI) Fellowship (2014–2015).

Steve Ruiz is an artist and writer currently based in Cambridge, UK. He earned an MFA from the University of Chicago in 2013 and has recently exhibited work at Roots & Culture and Flat Space in Chicago and Bermuda Gallery, Milwaukee. In addition to his studio practice, Steve writes about contemporary art for Daily Serving and manages Chicago’s visual art calendar, The Visualist.

John Steck Jr. is an artist from Chicago who earned his BFA at the Massachusetts College of Art & Design & his MFA at the San Francisco Art Institute. He has exhibited across fourteen states and completed artist residencies in Iceland. Recent publications include Romka, Aint Bad Magazine, Incandescent & The Hand. He currently teaches at Waubonsee Community College.

Linda Tegg explores the contingent viewing conditions through which we orient ourselves in the world. Driven by curiosity, her work oscillates from the romantic to the forensic, in efforts to decipher abstract concepts through concrete models. The artist was the Samstag Scholar of 2014, The Georges Mora Foundation Fellow of 2012 and has been the recipient of numerous Australia Council for the Arts and Arts Victoria Grants. She has degrees from The University of Melbourne and RMIT University. Recent Solo exhibitions include; Grasslands, The State Library of Victoria, Melbourne, 2014; Choir, Westspace, Melbourne 2014; Coexistence, MARSO Galleria, Mexico City, 2012. Selected group exhibitions include; Don’t Talk to Strangers, Random Institute, Brooklyn, 2014 and NEW13, Australian Centre for Contemporary Art, Melbourne, 2013.

Andrew Yang is a transdisciplinary artist and scholar working across the interweaving of the natural, cultural, and bio-historical. His projects have been exhibited from Oklahoma to Yokohama, Chicago to Kassel, with new work for the 14th Istanbul Biennial in 2015. His writing & research appear in journals crossing biology, art, and philosophy including Biological Theory, Interdisciplinary Science Reviews, Antennae, Interdisciplinary Studies in the Philosophy of Science, and Leonardo. He holds a PhD in Zoology and MFA in Visual Arts; he is currently an Associate Professor at the School of the Art Institute of Chicago. In the fall of 2015 he will be a visiting scholar at the Max Planck Institute for the History of Science (MPIWG) working on archival knowledge through the Anthropocene.