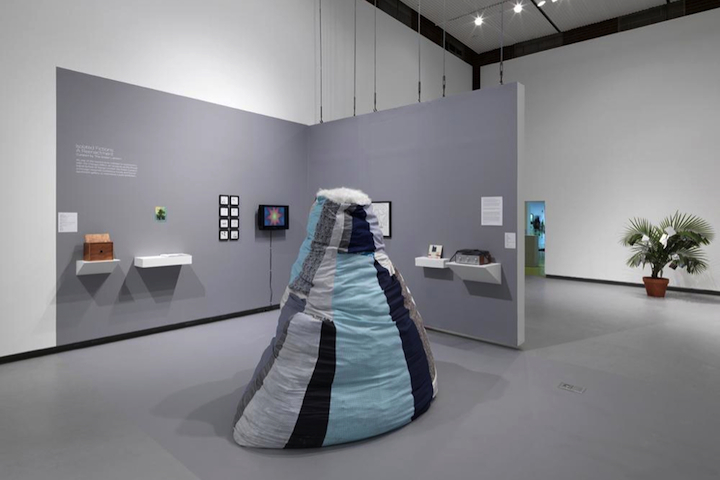 “This time around, The Green Lantern…reprises its closing exhibition, a delightful celebration of the fleet of English sailors who in 1821 were icebound for nine months in the Arctic, during which time they produced weekly plays and a newspaper. Standouts from the show within a show include Hui-min Tsen’s “Moonscape in Earthlight,” a wondrously convincing peephols box, Amanda Browder’s cuddly quilted iceberg and an exquisite little gouache by Jason Dunda, which purports to illustrate ‘The Most Beautiful Searchlight in the World.” It’s just a floodlight on a rooftop, but to those stranded sailors any visible searchlight would surely have seemed superlative. (As it happens, The Green Lantern recently reopened in Logan Square. I like to imagine it was buoyed by its survivalist swan song.” — Lori Waxman, Chicago Tribune, (November 13, 2014).

“Exemplary of [The Chicago Effect: Redefining the Middle’s] strengths is a brief interlude in the middle of the main gallery marked by a stripe of grey paint that hangs on the walls and floor between two halves of the white cube… Isolated Fictions: A Reenactment, as the sub-show is titled, presents a provocative case study in the generative possibilities between art schools, small galleries, art centers, and other ‘middle men’ of the art economy.” — Elliot Reichert, Chicago Artist Writers.

In June 2014, The Green Lantern, a nonprofit publishing house and former apartment gallery, was invited by a group of Rhode Island School of Design students to reproduce one of The Green Lantern’s past exhibition in response to the Hyde Park Art Center’s Chicago Effect: Redefining the Middle. The resulting choice, Isolated Fictions, explores a curious incident in history when a fleet of English sailors found themselves icebound in the Arctic for nine months. In order to survive, they put on weekly plays and published a newspaper of theater reviews, inside jokes, poems and classified ads. The resulting periodical, The North Georgia Gazette, presents the sailors as an older, idiosyncratic DIY art collective whose activities arguably sustained the crew through a physically, and psychologically inhospitable environment. In the original exhibition, participating artists reflected upon that marginalized nautical history with their contributions. Original contributors, Amanda Browder, Nick Butcher, and Nadine Nakanishi include their original contributions at The Hyde Park Center. Otherwise the show has changed significantly and illustrates the way thought (and memory) shift over time. Carmen Price reinterprets his original painting using new strategies and materials, while Deb Sokolow invited artist Steve Ruiz to participate on her behalf. Jason Dunda submitted a different work, and two new artists, Maria Dumlao and Hui-min Tsen, entered the fold. Isolated Fictions: A Reenactment reflects the dynamic, ever-changing nature of history and the bearing it has on future communities. Three iterations of Isolated Fictions took place previously at AS220 in 2009 (Providence), FLUXspace in 2010 (Philadelphia), & The Green Lantern Gallery in 2010 (Chicago Ave., Chicago). The Philadelphia show was covered here.

The Chicago Effect: Redefining the Middle is an exhibition and public program that engages artists and practitioners in considering conditions of the middle—both conceptual and concrete. Artwork on view in The Chicago Effect will explore permeable boundaries, liminal spaces, and in-betweens, identifying and asserting the necessity of the middle as a fertile improvisational space that becomes a creative engine, and raising questions about the value of a middle-man, a middle class, a moderate political position, and even the middle ground between formal and material states. Using the Art Center as a model for how an arts institution can occupy the space of the middle to foster intercommunity connectivity and spur creative production, public programming and a printed catalogue will accompany the exhibition to offer analyses of how mid-sized organizations can serve and engage audiences. Co-curated by Director of Exhibitions & Residency Programs Allison Peters Quinn, Residency & Special Projects Manager Megha Ralapati, and New York-based guest curator Christopher K. Ho, the exhibition encourages movement away from the poles. The curators frame the position of the middle as an essential condition of the creative process, selecting artwork that exemplifies this idea.

Born in Missoula, MT in 1976, Amanda Browder received an MFA/MA from the University of Wisconsin at Madison and taught at the School of the Art Institute of Chicago. She currently lives and works in Brooklyn, New York producing large-scale fabric installations for building exteriors and other public sites. She has shown on three continents including at the Nuit Blanche Public Art Festival/LEITMOTIF in Toronto; FAB Fest, New York City; The Dumbo ArtsFestival, Brooklyn; Mobinale, Prague; Allegra LaViola Gallery, NYC; Nakaochiai Gallery, Tokyo; White Columns, NYC; No Longer Empty, Brooklyn. Photos and reviews have appeared in print media from the New York Times to Fibers Magazine and she is a founder of, and can be heard on, the art podcast, www.badatsports.com. The artist website is www.amandabrowder.com

Nick Butcher (b. 1980, Dyersburg, TN) is an artist and musician living in Chicago, Illinois. He is currently an MFA candidate at the School of the Art Institute of Chicago in Printmedia. Butcher’s work, though diverse, has centered around printmaking since 2001. He received his BFA form Middle Tennessee State University under the guidance of printmaker Christie Nuell in 2002. A Chicago resident since 2003, Butcher has worked under local printmaker Jay Ryan, as well as established Sonnenzimmer, a collaborative art practice, print and design studio with his wife, Nadine Nakanishi. Their collaborative work has been shown in the United States, Europe, and China with recent exhibits at the Art Institute of Chicago, the Museum of Contemporary Art Chicago, the Minneapolis College of Art and Design.

Born in Manila, Philippines, Maria Dumlao is an interdisciplinary artist whose work has been exhibited and screened Art in General, Momenta Art Gallery, and Schroeder Romero Gallery in NYC, The Contemporary Museum in Hawaii and internationally. She’s had residencies at Experimental Television Center in Owego, NY, and at free103point9′s Wave Farm in Acra, NY. Her collaborative work with Brainstormers has appeared at Brooklyn Museum of Art and Bronx Museum of Art (a collaboration with Guerilla Girls) and received funding from The Puffin Foundation. She received a BA in Studio Art and Art History at Rutgers College in New Brunswick, NJ and an MFA in Studio Art at Hunter College-CUNY in New York, NY. She is currently an Assistant Professor at Bucks County Community College in Newtown, PA. Since moving to Philadelphia in 2010, she’s been involved with Little Berlin and Vox Populi.

Jason Dunda is a Canadian painter currently living in Chicago. Trained as an oil painter at York University in Toronto (BFA) and The School of the Art Institute of Chicago (MFA),  he is currently working on a suite of gouache paintings called “The Most Beautiful Things in the World” in which he depicts images of beautifully ramshackle instruments of authority. Outside the studio, he is an Adjunct Assistant Professor at the School of the Art Institute of Chicago where he teaches studio and seminar classes in the Contemporary Practices and Arts Administration and Policy departments. Recent projects include “Euphemize” at Slow in Chicago; “Sensible” at Katharine Mulherin  Contemporary Art Projects in Toronto; “Isolated Fictions” at Fluxspace in Philadelphia, Green Lantern in Chicago, and AS220 in Providence; “no substantial advantage to mankind” at Kasia Kay, as well as the Hyde Park Art Center in Chicago, Cain Schulte Gallery in San Francisco, James Baird Gallery in St. John’s, the Contemporary Arts Museum in Houston, the Institute of Contemporary Art in Boston, and the Wexner Center in Columbus. International exhibits include the Heine-Onstad Art Centre in Oslo, the Kuwait Art Foundation in Kuwait City, and  SÍM Gallery in Reykjavik. His work is represented in the collections of Todd Oldham, the Agnes Etherington Art Centre and the Doris McCarthy Gallery at the University of Toronto. Recent residencies include the Corporation of Yaddo, the Atlantic Center for the Arts, and a four-month research and production residency at the Cité Internationale des Arts in Paris.

Rebecca Mir Grady is a Chicago based artist, by way of Alaska and Maine. When she was too little to walk, she was pulled around on a sled by a german shepherd called Namer. Her work is primarily concerned with the perplexing character of interactions with nature. Grady received her MFA from the University of Illinois at Chicago and a BFA from the School of the Art Institute of Chicago. She has exhibited widely around the US and Internationally, at the University of Chicago, Columbia College, Carthage College, Illinois State University, Pittsburgh Center for the Arts and Prosjecktrom Normanns, among others. Her work can be found online at www.sheisrestless.com.

Nadine Nakanishi (b. 1976, Los Angeles, CA) is a Swiss-American artist based in Chicago, Illinois. Nakanishi works across several disciplines including printmaking, painting, weaving, and graphic design. She studied typography at the Gestalterische Berufsschule in Zürich, Switzerland. In 2006, she established Sonnenzimmer, a collaborative art practice, print and design studio with her husband, Nick Butcher. Her individual work has been shown in Switzerland, while her collaborative work with Sonnenzimmer has been shown in the United States, Europe, and China with recent exhibits at the Art Institute of Chicago, the Museum of Contemporary Art Chicago, the Minneapolis College of Art and Design.

Steve Ruiz is an artist and writer from Chicago, having earned his MFA at University of Chicago in 2013. In addition to writing for Daily Serving and Bad at Sports, he manages the visual art calendar website, The Visualist.

Hui-min Tsen’s work explores the act of exploration itself with an emphasis on the individual’s everyday relationship with place, wonder, and the unknown. Through a series of projects ranging from boat-building to walking tours, she has sought to cross the distance between here and over there by reaching for the myth and mystery present in our everyday landscape. Selected exhibitions and publications include the Hyde Park Art Center, Gallery 400, MDW Fair, and Proximity Magazine. Screenings and performances include work with Public Culture Lecture Series, the Macedonian Museum of Contemporary Art and Neighborhood Public Radio’s This American Life at The Whitney Biennial 2008.  Her first book, The Pedway of Today, was published through Green Lantern Press in 2013. She received a BFA from Tisch School of the Arts, and an MFA in photography from the School of the Art Institute of Chicago and currently teaches photography and video in Chicago.