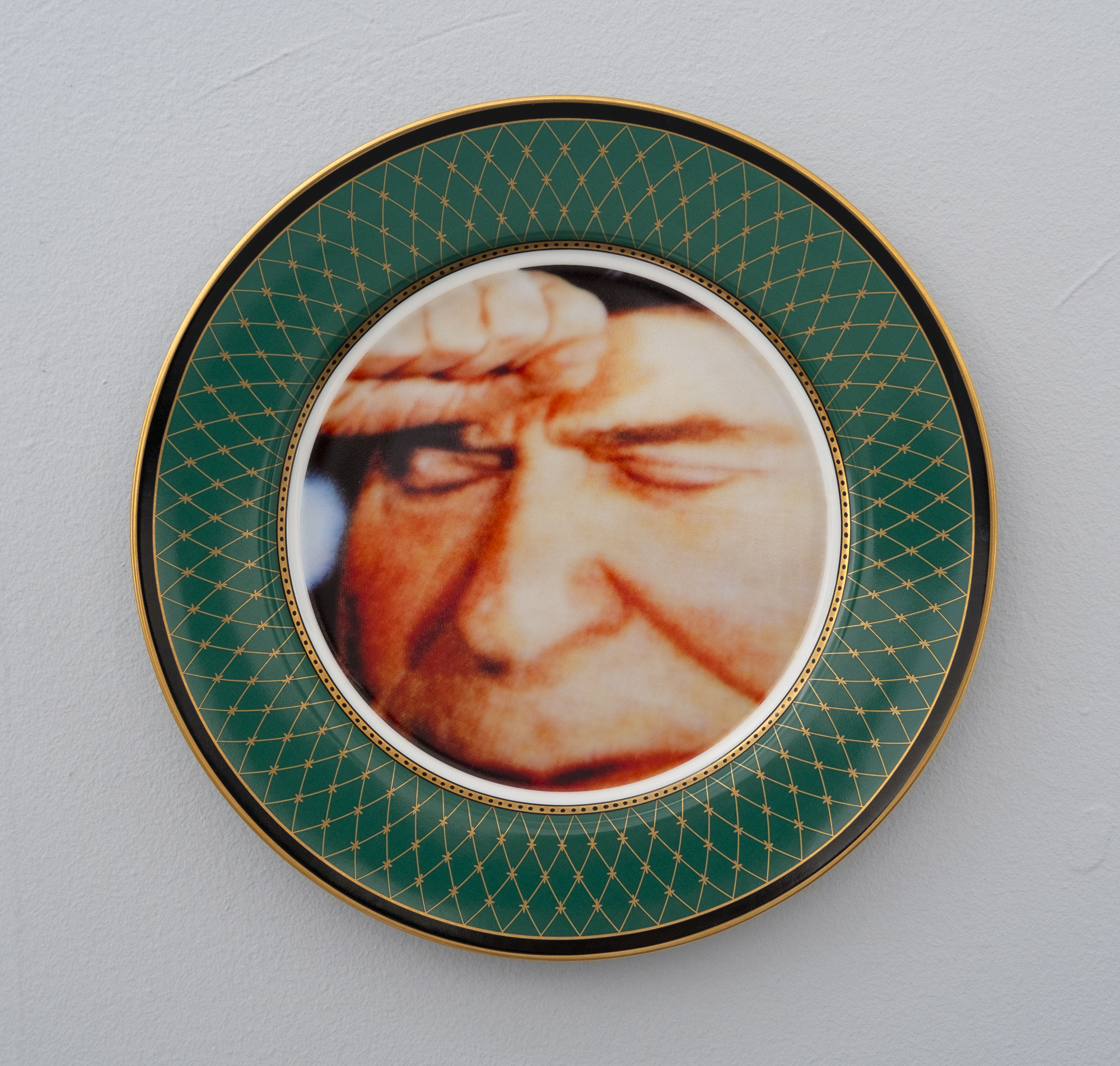 The Green Lantern Press is pleased to present Facsimile, a group exhibition curated by Institutional Garbage contributor Britton Bertran of artwork by artists who are specifically interested in re-contextualizing the antecedents of images and ideas. Taking aesthetic ownership of pre-existing conditions, be they otherwise political, social and/or moral, constitutes a meaningful and personal tribute rendered in an object intended to be absorbed. Familiarity with the object, however far removed from the original idea, constitutes a mnemonic signaling to the viewer that the image in question may hold more meaning than the original. That rendered psychic space between the “real” and the newly real questions ownership, sharpens the senses and activates the transitive effects of the imagination.

Bean Gilsdorf is an interdisciplinary artist based in San Francisco. Working with appropriated images and texts, Gilsdorf creates sculptures and performances that delve into the relationship between historical narratives, the iconography of authority, and the ways in which representations influence our perception of cultural values. “Gilsdorf invites us to consider the limits of power such images have, the point at which they become diffuse and illegible, and the absurdity that arises when they are ignored.” Her projects have been exhibited at the Museum of Contemporary Art, Santa Barbara; the Wattis Institute for Contemporary Arts; and the American Textile History Museum; as well as exhibition spaces in Poland, England, Italy, China, and South Africa. Gilsdorf graduated from Simon’s Rock at Bard College with a B.A. in Literature, and received her M.F.A. in Fine Arts from California College of the Arts. She has been the recipient of numerous grants and fellowships, including 2015 and 2016 Fulbright Fellowships to Poland, the Bess Winspear Memorial Scholarship at Banff Centre, a Graduate Fellowship at Headlands Center for the Arts, and a Graduate Full Merit Scholarship at California College of the Arts. In addition to her work as an artist, Gilsdorf is an art critic and professional editor. She is the former editor in chief of Daily Serving, an international publication for the contemporary arts, and her critical writing and interviews have been included in publications such as Artforum, BOMB, and Frieze. She is currently a columnist-in-residence for SFMOMA’s Open Space.

Joshua Caleb Weibley is an artist based in Brooklyn, NY.  He received his BFA from Cooper Union in 2009.  His conceptual works are comprised of digital photography, printing, drawing and sculpture.  Pieces that appear minimal are culminations of multistep processes and meta connections between material and subject.  His work has been exhibited in group shows at Klaus Von Nichtssagend, Miyako Yoshinaga Gallery, Et Al Projects, Eyebeam, and Vox Populi.

Omar Velázquez (b. 1984) Born in San Juan, Puerto Rico 1984 and based in Chicao, IL. He obtained a BFA in Printmaking from the University of Puerto Rico and an MFA in Painting and Drawing from The School of the Art Institute in Chicago. He has presented several individual projects at the Puerto Rico Museum of Art, and the Puerto Rico Museum of Contemporary Art. He has been awarded for contemporary art and cultural institutions. His professional career includes the participation in numerous group exhibitions, biennials and triennials in Japan, Beijing, Spain, Republic of Macedonia, New York, Chicago, Boston, Philadelphia, Argentina, Mexico and Colombia.

Jason Pickleman (b. 1965) Bridging the gap between fine and commercial art, Pickleman has created a body of work both conceptual and popular, applying media as varied as neon, offset printing, silkscreen, collage and photography. Pickleman’s studio, the JNL graphic design, was begun in 1992 and specializes in the creation of graphic ephemera of unique cultural significance. Exhibition catalogues, art objects, informational propaganda and generally exotic cultural paraphernalia for clients such as Blackbird, Avec, Publican, The Wit, The Museum of Contemporary Photography, The Renaissance Society and Harrington College of Design, all bear the imprint of the studio’s unique vision. Pickleman was included in the 2007 exhibition Young Chicago at the Art Institute of Chicago, and his work has subsequently been placed into the museum’s permanent collection