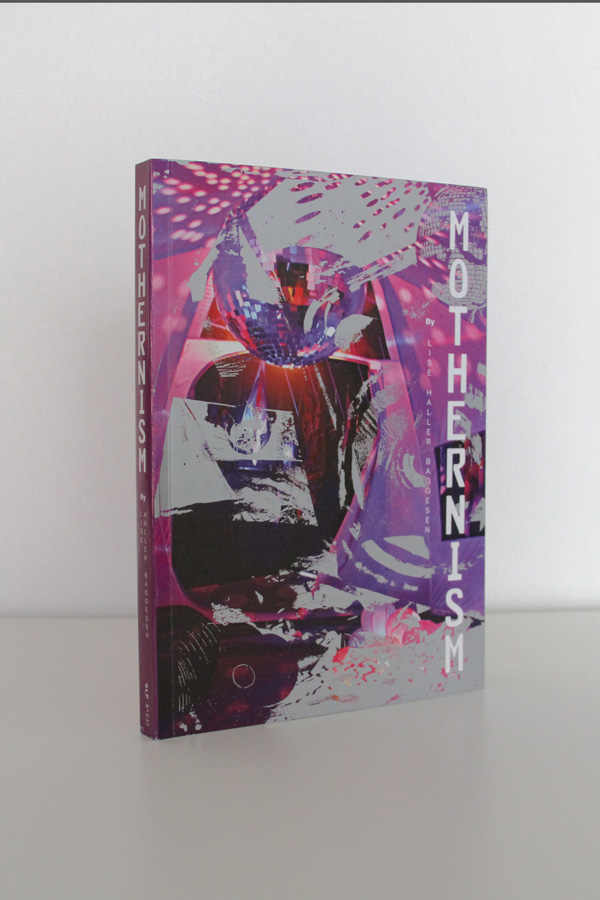 At the intersection of feminism, science fiction, and disco, Mothernism aims to locate the mother-shaped hole in contemporary art discourse. If the proverbial Mother is perhaps perceived as a persona non grata in the art world, because her nurturing nature is at odds with the hyperbolic ideal of the singular artistic genius, Mothernism amplifies her presence, channeling her energy, complexity, and sublime creative potential in a series of intimate and critical reflections. The resulting collection of letters—dedicated with love from one mother to her dear daughter, sister, mother, and reader—fuse biography, music, art, and history into an auto-theoretical testimony that recalls and redefines the future imperfect. Layout and design (in all its glitter) by Sonnenzimmer.

“Being a mother, that most universal yet personal experience, has always been a creative act, albeit rarely acknowledged as such. InMothernism, Lise Haller Baggesen calls it for what it is: generative, radical, bodily, intense, staggering, connective, and then some.”—Lori Waxman

“From cleavage to cobras to cherry popping,Mothernism is both a contemplation and call to action vis-á-vis the position and shape of the MOTHER in contemporary art and culture. This smart and often hilarious series of letters and observations address the direct MOTHERing experience as a kind of radical personal economy. For Lise Haller Baggesen, the MOTHER is the agency. Baggesen is from the generation of female art makers whose only option is everything and all at once. Mothernism is spry and accessible, sometimes a battle cry, and sometimes a lullaby. Fourth Wave Feminism has a new manifesto.”—Jennifer Reeder

“Mothernism. Ha! Baggesen could’ve stopped there. But I’m glad she didn’t. She is not one for cheap irony. Her tack sharp wit ultimately gives way to sustained theoretical analysis required to unpack such a funny but formidable elision. Besides, irony, no matter how pointed, does little if any justice to the all too real ‘mother-shaped hole in contemporary art discourse,’ a Mary Kelly-shaped hole to be specific. And if that lacuna weren’t wide enough, between, say, Tiqqun’s ‘Theory of the Young-Girl’ and Anne-Marie Slaughter’s ‘Why Women Still Can’t Have It All,’ mothers contend with a representational force field that amounts to a funhouse mirror, making Baggesen’s reflections a welcome rallying point. But it’s clear from the get go that this ain’t about galvanizing soccer moms in a campaign against texting and driving. Negotiating the eddies and whirlpools of an intergenerational feminism makes a retreat into any kind of movement all but impossible, leaving Baggesen to speak for herself. She is a demographic of one. Above all, Mothernism is rooted in Baggesen’s voice whose tone is by turn tough, tender and by the end of the book, downright touching. A seamless mixture of cultural criticism, theory and biography, the essays double as a paean to disco and an open letter to her daughter. Engagingly conversational and endearingly confessional, Mothernism finds Baggesen (long my fashion idol) psychically naked one minute, and speaking frankly of sequins the next. Yummy Puffy Mommy Yoni, Yummy Yummy.”—Hamza Walker