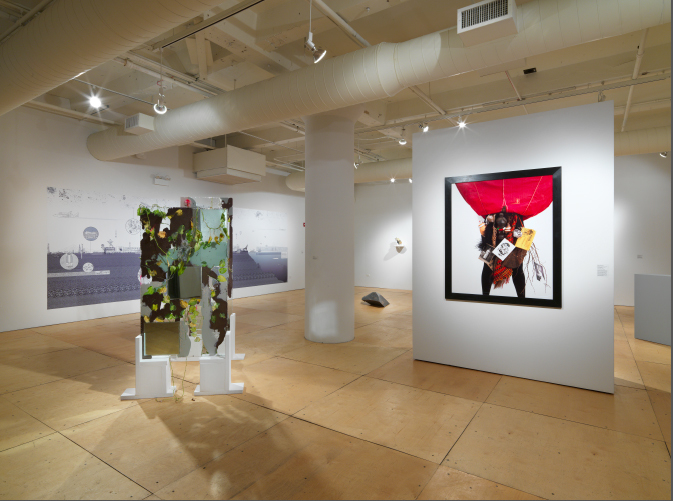 The Northwest Passage—an historic golden fleece of shipping routes—has opened up in the Arctic, and scientists continue to predict dramatic rising seas. Bee populations have fallen rapidly, raising questions about food production. Mice grow human ears on their backs in laboratories and rabbits glow in the dark. In this new age of ecological awareness, “Nature” as a Romantic ideal—a pristine mountainside beyond the scope of human influence—is but a dithering spirit. Rather than succumbing to the pang of this loss, Ghost Nature exposes the limits of human perspective in the emergent landscape that remains: a slippery network of sometimes monstrous creatures, plants, and technological advances.

In France, Ghost Nature took place as a two part exhibition in January and March. Both iterations were covered by the local Bourges paper, Le Berry, here and here. It was listed in depth on AAAR.Fr, and reviewed by Paris Art who wrote, “By reflecting, criticizing, blurring and moving the boundaries between what is human and what is not, the material presented here emphasizes the fluidity of the enigmatic natural landscape we inhabit” / “En reflétant, critiquant, estompant et bouleversant les frontières entre ce qui est humain et ce qui ne l’est pas, les plasticiens présentés ici soulignent l’énigmatique fluidité du paysage naturel que nous habitons.”

In Chicago, Ghost Nature was sited as one of Hyperallergic’s top 10 shows to see in Chicago during the polar vortex winter, made the top 20 and top 18 list of shows to see in the Chicago Magazine in January and February respectively, and was listed on the CAA website as a recommended exhibit.

It was also reviewed in the Turkish magazine, Art Unlimited.